Last year I was asked to write in a proposal for an “Ogham Stone sculpture” for Blackstairs Eco Trails, in Killedmond near Borris, Co. Carlow, Ireland.  This commission is supported by Bord Failte (the Irish Tourist Board) who are currently promoting the ancient history of the east of Ireland www.IrelandsAncientEast.com  (this follows the very successful ‘Wild Atlantic Way’ that celebrates the West of Ireland).

The proposal was to place a  Ogham standing stone sculpture along the route of the Blackstairs EcoTrails “Celtic Tree walk” at Killedmond, and depict  each  letter of the Ogham alphabet that corresponds to a native Irish tree. Many letters in the Ogham alphabet are directly associated with trees and plants, which resonates with Blackstairs Eco-Trails and their ethos of sharing knowledge of the native flora of Ireland to visitors from near and far.  I saw the work as greatly enhancing interest in our ancient culture and long lost forests. As many of you know, I love the local stone and was excited at the prospect to do a work in Carlow granite.

This area of south Co. Carlow has a rich but little known megalithic history with a number of standing stones (at Crannagh), a dolmen at Ballynasilloge, and abundant rock art (for example, at Rathgeran, Knockroe) in the immediate vicinity.

I was awarded the commission at the start of the year and I’m setting out this project in a series of posts as the work took several months.

First, my initial inspiration was to look at images of Standing Stones that I have collected over the years (see the images in this post).

Postcard from Scotland Ballochroy, I liked the form of these standing stones

I also travelled to some sites just to see some Ogham stones in their original sites. The nearest Ogham stones to here are Rathglass near Tullow, Co. Carlow, Gowan and Tullaherin in Co. Kilkenny. I also went as far as Bunmahon on the Copper coast where two standings stone are located in the “Geo-park”. As an aside, there is a great little museum at Bunmahon in the Old Church of Ireland, detailing the geology and mining history of the area. There is a beautiful Crinoid fossil there (thanks to Billy Crowley for showing us around).

Ogham stone at Bunmahon on the Copper Coast 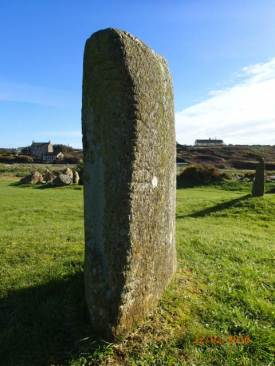 Ogham stone at Bunmahon on the Copper Coast

Ogham in 3D is a great project run by the Institute for Advance Studies that enables many oghams stones in Ireland to be examined in 3D.

And I visited University College Cork’s Ogham Stone collection, the largest collection of Ogham stones in Ireland (which I discuss in the next post).